2,424 runners finished the race on a perfect Autumn day in Cambridge.

The Cambridge Classic series features a team environment. Groups from different clubs, companies or groups of friends get together and register as a team. Each team that has at least 20 runners get’s their own pop up tent with a table and beer!

The more runners on your team, the more beer on your table. Jacks Abbey provides the cases and for the Cambridge Fall Classic 5K poured about 20 kegs of House Lager into thirsty runner’s cups.

A good time was had by all.

I had an average race. I lined up too far from the front and got stuck in the crowd. I’ve run this course a few times before and visualized navigating the corners. The corners will still congested and the side streets were too narrow.

The only street with enough room to run was Mass Ave. I didn’t wear a watch so I can only say it felt like I had a good run down Mass Ave. As we came up to the turn off of Mass Ave onto Putnam Ave I tried to make a smart turn, but it was crowded.

Putnam Ave was crowded after the turn. Runners started to spread out a bit as we ran down Putnam and approached Mile 2. I don’t know how many people started in front of me, but I passed a lot of people and still finished comfortably back in the pack.

I’ve been running a lot of 5Ks this summer and have learned a lot about them. I pretty much know how I’m going to feel at mile 1, 2 and three. I know what I need to do to prep for a race. Knowing your body and what to expect during a race is more than half the battle.

The other half of the battle is being in good running shape. Normally over the summer I loose 5-10lbs from the long runs and longer races. This summer I rarely ran more than 7 miles. This lack of miles really held me back from hitting a 5K PR this summer and this weekend it held me back from a strong race.

The reality is that I am an older runner now and I need to put in the miles. Putting in the miles worked for me before, now that I’m older it doesn’t make any sense to expect anything with fewer miles.

I have been really good about getting to the gym 2-3 times a week. I’ve toned up a lot but blasting my legs at the gym made it harder to go out and run the next day. I need to work on my strategy in this area. 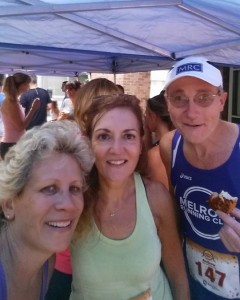 Last February I met a few members from the “Running Team” “Slow and Thirsties.” They are a group of ladies who enjoy running and having a good time afterwards. We are all about the same age and have fun swapping stories about our kids and careers and life in general. Everyone is married but no one ever complains or tells stories about their spouse. Kids, careers and a crazy world give us plenty to talk about.

I’m usually the first one on our team to finish the race. The ladies often bring food or additional drinks. My job is to grab a few cups of beer so that when everyone else finishes, their beer is waiting for them. So far it has worked out, but I’m waiting for the beer tent guys to cut me off after my 3rd two-fisted trip to the tent!

We had a great September day to enjoy a Beer Garden after the race. It was warm and sunny and everyone was having a great time. It was a bit of Munich in Cambridge, MA.

We drank a few beers, told a few stories and played a drinking game or two. Linda and Cheryl had to go pick up their race packets for their race on September 26th. The party was winding down and I had to get home.

I walked across Cambridge in my running gear with a six-pack of Jack’s Abbey in each hand. A great day in deed!

Tell us what you think Cancel reply

This site uses Akismet to reduce spam. Learn how your comment data is processed.