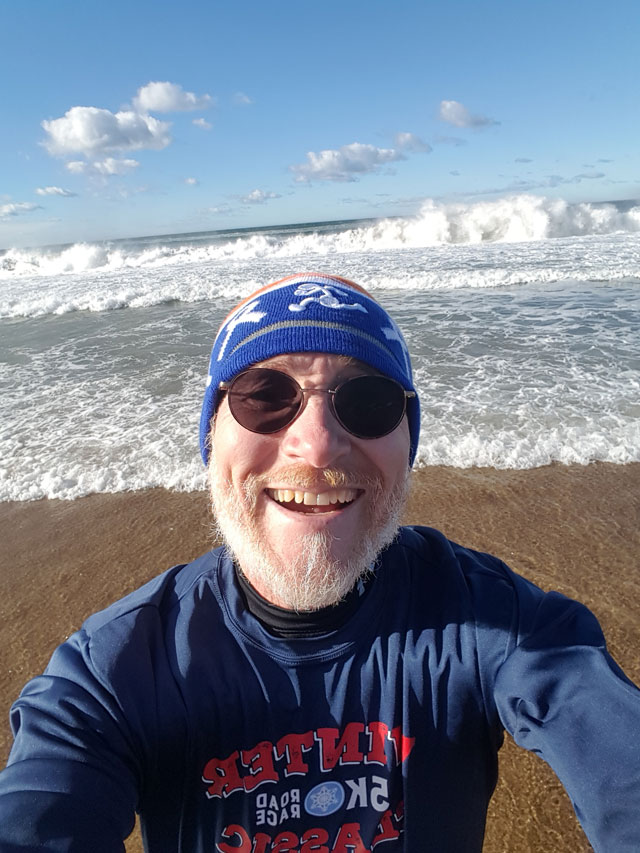 The first race of 2019 has been run! 2019 was the 38th running of The Hangover Classic. You’d think that after all these years we’d know better!

I drove up with Mike Sikkema and Durm Cahill. All three of us managed to get to bed before midnight and none of us had a hangover.

Even without the hangover both Mike and Durm managed to run the wrong race. All of us had signed up for the 10K. Somehow Durm and Mike lined up with the 5K runners and didn’t realize they were on the wrong course until they were will into the race.

Durm did a day-of registration but we were there early enough that there wasn’t much of a crowd. After taking care of business we headed back to Mike’s car. As we walked by the beach we decided to take a look at the ocean. The temperature was in the 50s but the wind was gusting 20-30 mph. When we looked at the ocean we could tell.

There had to be six-foot waves anyway. When I was in Hawaii at a surf beach they said the waves were 10-15 feet. These waves were half that size but they looked like they were creating an under-tow.

I hoped that the race organizers weren’t going to make us go for a swim to qualify for the Ocean Plunge beer glass. Last year it was in the 20s and they had us just get our feet wet. This year the peril to life was of a different variety.

Final Prep and the Line Up

We sat in Mike’s car, pinned on our bibs and did our final prep. After about five minutes we decided to go for a warm up jog.

Mike did some dynamic stretching and then we were off. We looped around near the start line and did about a mile and a half jog. Mike did about two miles.

As we started to head out, I suggested we get in the porta-potty line. It was a warm day, but I knew the cold gusts off the ocean would chill us to the bone as we waited for the start.

As we walked up the street the line looked like it was a block long! Oh well, I thought. As we got closer we saw multiple lines of about 20 people. We had 15 minutes to the start, so we had plenty of time.

Mike and I made it through but Durm barely made it to the starting line in time. It’s a chip timed race so it’s not that big of a deal to miss the starting gun.

As I approached the start line I saw a huge crowd. It was the 706 5K runners lined up. I seemed to recall an email from the race director that said 10K runners should line up on the left.

They didn’t mean the left side of this corral. They meant the other side of the street! I made my way through the 5K crowd and headed to the 317 10K runners.

I was so wrapped up in getting through the porta-potty line and to the 10K corral that I had forgotten to start my watch. With less than a minute to the start I fired up my Garmin. When the race started I still hadn’t locked onto a good signal. Oh well.

Without much fanfare they started the races. Both races began at the same time but each had their own course. I didn’t see Mike or Durm, but I didn’t see any familiar faces.

We lunged to the start and suddenly stopped. The timing mats didn’t go across the entire road so everyone had bunched in to get an official start time.

Quickly we were up to speed and taking our first left. I stayed in the street to avoid any fire hydrants. The first mile wound us through town and back across Rt. 1A, the main road into town.

After that it was the long slog out 1A/North End Blvd.

I never saw Durm or Mike so I was on my own. I’ve run this race a few times, so I knew what lie ahead. No hills, just four miles of flat road. It’s a good race to settle into your race and drive it.

My first mile came in at 7:38 but I didn’t believe it. I figured it had something to do with partial satellite connectivity. Before the half mile mark my watch said I was running a 6:47 pace. Yeah, right! No freakin way.

I settled on the idea that I would have to use the course clocks to try and figure my pace. This race doesn’t have any clocks on the course! As my watch chimed the miles I never heard anyone else’s watch chime. How far off was my watch?

At mile two my watch chimed 8:13. That seemed more like it. I felt like I was running that pace and I wondered for how many miles more I could keep that up.

At mile 2.5 the leaders passed us. I saw a police car headed our way and thought there had been an accident. After the first place runner passed us the police car roared past us to guide him in.

At this point all of us had the breakdown lane to run in. As the leaders came back we had to move over for them. It’s what we do.

The wind was howling off of The Atlantic and between the shore front homes. When I first noticed the sound I thought it was a jet. But the noise didn’t go away. Sometimes it changed when the wind whipped through deck railings or other structures.

At mile three we took a right off of Rt 1A to loop through a neighborhood for our turn around. My mile three came in at 8:30. Almost half way and I was still doing pretty good.

At about 3.25 miles I spotted a Melrose Running Club singlet running towards me. I had been looking for familiar faces, but the glare of the sun made it difficult.

As the runner approached I realized that it was Mike Sikkema! I was shocked. Had he blown everyone away, finished the 10K and was out for some sort of a fun-run cool down?

Mike saw me and turned around to run with me. I was a little confused but Mike explained. He had lined up in the 5K corral and ran that race! He realized his error when it was too late.

As he neared the three-mile mark people around him started to kick. That’s way to early for a 10K. He already knew something was wrong but this confirmed it.

He ran in the 5K. Before he told the timers what was going on, he was the first place 10K finisher at 18:55. We’re talking Usain Bolt speed here and Usain doesn’t run 10Ks.

After he explained what happened he headed out to find me and Durm.

As we ran Mike tried to tell me what happened and I of course tried to carry on a conversation. Even after running four or five miles, Mike was still killing me. I could barely keep up without talking. Trying to talk was just killing me.

I told Mike, “No talking” and he slowly pulled away. I felt like a jerk for blurting out basically “shut up.” On the way home I explained why I said that and he understood. He said he felt a bit like a jerk also as he could tell I was giving it my all to run and should have known better.

Mile four came in at 8:22. I felt pretty good and the wind was at my back. We had about another mile of this running and I went for it. Mile five came in at 8:20.

At mile 5.03 my watch lost satellite connection! WTF! How could this happen in the wide open? The battery was fully charged so that wasn’t the problem.

I figured I had just over a mile to run, so I should be okay.

As we wound though the neighborhood I tried to keep my pace up. I was keeping up with most of the people around me but others kept passing me.

Somewhere within a half mile of the finish line I saw Durm walking down the road towards me. I thought something had happened, but he looked okay. He said something about running the 5K race. I couldn’t believe he did the same thing Mike had done, but there he was.

As we approached the last turn onto Broadway I kicked in what I had. Without a watch or mile marker I guessed we had a quarter-mile to go.

The finish area wasn’t congested so I got over the line and grabbed a water bottle easily.

I hung around and waited to see Mike or Durm cross the line. After about five minutes I headed for the beach for my ocean plunge.

There weren’t a lot of people on the beach, but 70% had run the 5K and were probably drinking beer as I contemplated The Atlantic Ocean.

Someone said I only had to wade in up to my knees and that worked for me. I took off my shoes and headed in.

It was freakin cold! As I waded towards knee depth water I could feel the veins in my ankles pulse and the feeling in my feet slowly fade.

The waves were crashing in. I made it to half-calf and headed back. If I went too far out a large wave was sure to soak me head to toe. I gathered my Popsicle stick and head to the boardwalk to put my shoes back on. As I headed to the club I texted Mike and Durm that they should meet me there. As I looked up there they were.

They told me what happened and asked if I’d done the ocean plunge. I told them they only needed to wade in. They headed for the water and I headed for the club.

After I got my beer glass I headed into the club. My glasses were so dark I had to follow the guy in front of me. I knew there was a step in the back of the bar, but I wasn’t sure where it was!

I stood in line for twenty minutes and made very little progress towards the bar. When Durm and Mike showed up we decided to bag it and head home.

While Mike and Durm had a disappointing day, they both seemed to be in good spirits.