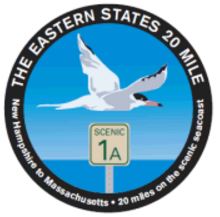 2017 was the 22nd annual running of the Eastern States 20 Mile race. This year the race returned to the original route, starting right outside the gates of the Portsmouth Naval Ship Yard in Kittery, Maine.

I signed up for this race on December 2nd, 2016. I’ve run it twice before and knew what I was getting In 2013 I ran a half and the Derry 16 Miler before this race. In 2014 I was training for The Boston Marathon and had run two half marathons prior to The Eastern States 20 Miler.

This year my longest race was the Great Stew Chase 15K and a few long runs over 13 miles.

Going into this race I knew I wasn’t prepared. I just didn’t know how unprepared I was. The plan was to run a 10 minute pace with Don Keren and Diarmuid Cahill. It seemed like a modest goal. Durm had never run more than a 10K race before so we didn’t want to push it.

We started at the very back of the pack and figured we’d make our way through the crowd. Within my first twenty steps I felt a twinge in my left knee. Then I felt another. We were going uphill on Walker Street in Kittery, so I hoped it was just the incline.

After those two twinges, my knee never bothered me again. What a way to start a 20 mile race!

From the beginning our pace was too fast. I kept trying to slow things down but the guys kept pushing. The first four miles were all 9:22 or better. Mile five was 9:02 and mile six was 9:08.

At this point I started holding my self back. I stopped running in front or even next to the guys. Slowly I let them go ahead. Mile 10 came in at 9:20 and I took my first walking break!

I took my first gel around mile three and took small drinks every mile or so. Even fueling early could not save me from my lack of preparation. At mile 10 I had to walk. I couldn’t believe it but my body was telling me that I had to.

I knew that I had walked for a quarter of a mile, but that pace just blew my mind! My watch even showed that my average pace was now 11:03! Ka-boom! Mind blown.

After my walk at the beginning of mile 10 I vowed to run the next mile and walk again. Then I managed to run to about Mile 14 and took a longer walk break.

Then I recalculated based on 15 minute miles and estimated it would take me around 2.5 hours if I could maintain that walking pace! At this point I wan’t even sure I could do that!

At Mile 15 the shit really hit the fan. As you can see from my chart above, I walked a lot and did some slow jogging.

At this point in the race my quads were exhausted and no amount of food or drink could fix that. I had been a little short of breath early in the race, but was now running too slowly to loose my breath.

I walked all of the water stops and took both water and Gatorade at some stops. I used all three gels that I brought with me.

By the time I got to the stop where the race was handing out gels, my stomach just couldn’t take anymore. I took the gel and put it in my pocket.

I’m not used to finishing late in a race. For the past two years I’ve been running mostly 5K and 10K races with the occasional half.

This year I finished The Eastern States at 3:29 or a 10:22 pace in the 77th percentile. My previous Eastern States 20 Mile races have been well under three hours. I don’t have the stats for those other races, but based on a 2:56 finish I would have been in the 42nd percentile this year.

It’s an interesting experience to run late in a race. You make friends and allies in a second and then in a minute they are gone. You are best friends and supporters for a brief moment and then one of you has to walk or pulls ahead.

I encouraged other runners, but mostly they encouraged me. I must have been leaving a trail of smoke out there. Sometimes someone would say something encouraging and I could barely get out some sort of a sound. I was in the zone and couldn’t spare the breath or energy.

At The Boston Marathon they would have to physically restrain me from running, even if I was spouting blood. People do crazy things at marathons, but Boston is off the charts.

When you are running a race no one else knows about, it’s much easier to quit. Few friends will care and your family will never know. Why keep going? Why did you even start?

The Hero at the End of The Line

Running and walking with all of those late finishers was a lesson for me. I’ve always said that the last people to finish deserve as much support and encouragement as the winners.

It takes a lot more to finish last than it does to finish first. The top runners are prepared and trained. The folks in the bottom 20%, or dead last, are either unprepared or having a bad day. For them to keep going when their legs burn and their stomach aches takes a lot of courage.

Some people flame out because they are running a distance they’ve never run before. They are pushing their limits.

You think running a 2:15 marathon is tough. Try running a six or seven hour marathon.

Quitting is always an option. No one is making anyone finish a race. For the runners at the end of the line there are no special medals. Sometimes there is little support and often there is little to no food or water.

The hero at the end of the line deserves our respect, a bottle of water and a bite to eat.

Run well my friends and be good to the runners behind you.